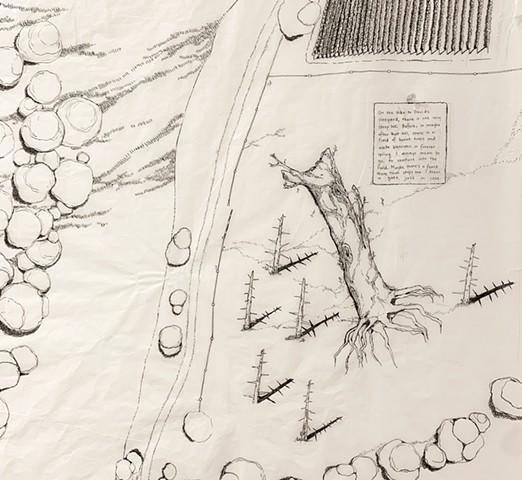 Four years ago, during the October of my senior year of high school, my hometown and the land I grew up on were ravaged by wildfire.

Suddenly, the natural landscape that served as the background to my youth became a site of memory; trees became skeletons of themselves, the earth was blackened, and dry creeks were bathed in ash.

Since then, my relationship with nature has evolved. I now take in the details of the natural world around me; the hills and rugged coastline of Northern California are an active space of rebirth and recovery of both memory and terrestrial life.

Clearings is a series of “memory maps,” drawings through which I chronicle the landscapes that occupy my memory. My goal is not to draw the landscapes with geographical accuracy, but rather as I recall them. By recreating these places with ink on tracing paper, I have been able to solidify fragile memories of ever-changing landscapes, and it has revealed to me the profound relationship between a sense of place and human nature.