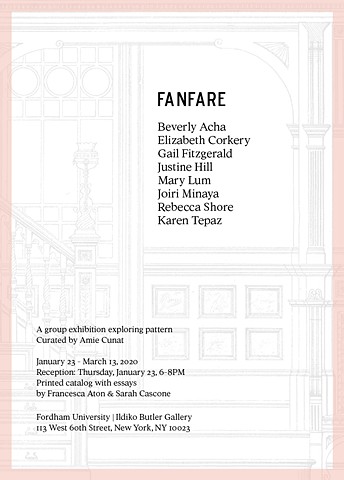 Fanfare Curated by Amie Cunat January 23 – March 13, 2020 Reception: Thursday, January 23, 6-8PM Fordham University and the Ildiko Butler Gallery is pleased to present Fanfare, a group exhibition curated by Amie Cunat at the Lincoln Center campus. Pattern, a recognition of regularity within the world, awakens our perceptive understanding as to how something may be organized. Within art the arrangement of color and form, touch and tactility, prompt insight, offer reference, and manifest content. The show brings together the work of eight artists who explore pattern through painting, sculpture, photography, printmaking, or installation. Beverly Acha, Gail Fitzgerald, Justine Hill, and Karen Tepaz use pattern as a way to construct an internal logic within abstraction, while Elizabeth Corkery, Mary Lum, Joiri Minaya, Rebecca Shore comment on histories, empirical references, or identities through the use of specific patterns and ornamental motifs.

An opening reception for the artists will be held on Thursday, January 23 from 6-8pm. A printed catalog accompanies the exhibition with essays by Francesca Aton (Art in America) and Sarah Cascone (Artnet News). Outside of the gallery, Cunat’s Collage & Mixed Media class at the Rose Hill campus will be responding to Fanfare through an investigative studio project. Artist talks with Karen Tepaz and Justine Hill will take place during the spring semester.

A number of artists represented propose alternate considerations of decorative patterns’ histories or uses. Joiri Minaya’s Proposal for artistic intervention on the Columbus Statue at Columbus Circle, New York, US, is an intervention that proposes to wrap New York City’s Columbus Circle monument of the Spanish explorer with tropical-patterned spandex. Both an investigative project into the history of Western colonization and challenging the contemporary depiction of heroes, Minaya situates the viewer to actively question the significance of these figures. Visitors to the gallery can participate in this conversation by writing a response on the provided artist’s postcards.

A dominant feature in the gallery is a site specific installation by Elizabeth Corkery. Printed on vertical lengths of paper, the artist reconstructs a decadent Victorian interior sourced from the period’s pattern books. The print is affixed to the wall at its top, which allows it to hang loosely with its seams purposefully visible and its extra material gathered at the floor. This unapologetically calls attention to the print’s materiality, and by extension, a paper thin facsimile of the historic ornamentation.

Mary Lum uses found text as collage material, then reconstructs its striated fragments into a visual language challenging the readability of its letterform. Furthermore, she is drawn to printed matter where its typography does more than announce the subject. For Monoprix 1, Lum paints the French chain store’s logo. Some letters are painted with bright cadmium red paint, which sets them apart from the brown and crimson hues of the image, creating a centralized stack of broken letter O’s.

Forms that resemble lengths of red ribbon are loosely wound through white rings and around black marquises in the fore of Untitled (17-14) by Rebecca Shore. Within her intricately painted abstractions, moments of recognizable signifiers converge in an ordered system that plays with symmetry, repetition, and tension. Recently, the artist has borrowed from Medieval visual culture, but when the disparate elements converge in a painting, clear glimpses of her sources fall away toward ambiguity.

Karen Tepaz’s and Gail Fitzgerald’s objects show the artists’ respective hand through a textured and colorful treatment of surface. Installed on delicate steel armatures, Tepaz’s objects appear to plume upward, as if billowing from their bases like flora. Despite the form’s heavy top, the objects’ rounded edges and light values pose a cloud-like softness. Fitzgerald’s ovoidal pieces are painted with acidic, flat hues punctuated by bold dots. The dots, applied with a saturated brush, creates a trail of drips, which reinforces a sense of gravity in these otherwise buoyant works. Once painted, the irregularity of their surfaces is amplified. Within these marshmallow-like pieces, an interplay between the pressure and release of Fitzgerald’s hand remains in the plaster sheets that cover an underlying mesh structure.

Prior to making her work, Justine Hill creates drawings to explore formal variations of pattern, space, and hue. The abstractions evoke a deconstructed landscape or still life, where each part of the painting embodies a site or arrangement of objects. In addition to a rich surface developed by playful mark-making, varied painterly gestures, and acute color choices, Hill’s shaped paintings also challenge the rectangular convention of the canvas through a range of invented forms.

Dynamic repetitions of wave forms react vibrantly against the coral pink and rose-hued fields of Beverly Acha’s espacio vertical, tres veces, tres horas. The artist chooses dramatic shifts within her colors’ temperature or value, and in doing so, develops the suggestion of emanating ambient light. Although the painting’s chromatic gradients indicate spatial shifts within its various formal elements, holistically, an exchange between figure and ground offer a simultaneous read. BEVERLY ACHA (b. 1987, Miami, FL) makes paintings, prints, and drawings that respond to the physical environment and psychological aspects of space. Her work has been exhibited at DC Moore Gallery, El Museo del Barrio, LeRoy Neiman Gallery, Smack Mellon, Rubber Factory, Underdonk, La MaMa Galleria, and International Print Center of New York, among others. She is a recipient of the CUE Art Foundation Aon-CUE Artist Empowerment Award, Robert Schoelkopf Memorial Travel Grant, and Frederick M. Peyser Prize in Painting. Acha has participated in residencies including Skowhegan, MacDowell Colony, Lighthouse Works, Roswell Artist-in-Residence Program, Wassaic Project, and the Vermont Studio Center. Acha holds a BA from Williams College and an MFA in Painting and Printmaking from Yale School of Art. She lives and works between Austin, TX and NYC and is currently an Assistant Professor in the Studio Art Program at the University of Texas at Austin.

ELIZABETH CORKERY born in 1986 in Sydney, Australia, lives and works in Sacramento. Her work, which incorporates printmaking, digital media and sculpture and more, reflects on the inherent contradictions of fine arts, craft and design, especially as they relate to the history and politics surrounding decoration and ornamentation. She has had solo exhibitions in the US and abroad, most recently at Outside gallery in North Adams, The Telfer Gallery in Glasgow, United Kingdom, Beers Contemporary in London, United Kingdom, and Tower Hill Botanic Gardens in Worcester. In May of 2019, she presented a commissioned mural in PC–G's Reilly Gallery at the culmination of her participation in the Residency for Visual Artists & Scholars on Providence College's campus. Corkery has received production and research funding from the Joan Mitchell Foundation, The Elizabeth Greenshields Foundation, Clark Hulings Fund, Brooklyn Arts Council, Somerville Arts Council and Australian philanthropic organizations The Dame Joan Sutherland Fund, The Ian Potter Cultural Trust and The Australia Council. In Fall 2020 Elizabeth will be participate in the Arts/Industry Residency program at the John Michael Kohler Center for the Arts, Sheboygan, WI. She holds a Master of Fine Arts from Cornell University and Bachelor of Fine Arts from UNSW Art and Design, Sydney.

JUSTINE HILL (Born 1985, Tarrytown, NY) received her MFA from the University of Pennsylvania and her BA from the College of the Holy Cross. Hill’s most recent exhibitions include Backdrops with Art in Buildings in New York (2019), Bookends at David B. Smith Gallery in Denver, CO (2019), Freestanding at Denny Gallery, in New York (2018), and Movers and Shapers with Ali Silverstein at Victori + Mo in Brooklyn (2018). Her work is in significant collections including The Davis Museum (Wellesley, MA), The Columbus Metropolitan Library (Columbus, OH), Aby Rosen and Samantha Boardman, Francis J. Greenburger, Nordstrom (Los Angeles, CA), among many others. She has been in critically reviewed group shows such as Metamodern at Denny Gallery and Immediate Female at Judith Charles Gallery in New York. Her work has been reviewed or featured in Art in America, Hyperallergic, New York Magazine, The Observer, The Huffington Post, The Art Newspaper, Artsy, Artspace, Arte Fuse, and Two Coats of Paint.

GAIL FITZGERALD’s work reflects a make-do work ethic and handmade aesthetic combined with a pleasure-seeking color sense. For over thirty years her work has engaged the material and pictorial concerns related to the exploration of painting in the expanded field. She studied at the School of the Museum of Fine Arts Boston and Massachusetts College of Art and Design. In 1986, she moved to the Lower East Side where she connected with the confluence of artists and musicians who presided over the denouement of the East Village art scene. She had her first solo show at Bess Cutler Gallery in 1989 and has participated in group and solo exhibitions at the Randy Alexander, Julian Pretto, Blum Helman, Roger Merians, José Freire and Stephanie Theodore galleries, among other venues. Her most recent solo exhibition, Calling Occupants, was organized by the artist Michael Brennan at the DeKalb Gallery at Pratt in 2015. Other recent projects include: Locally Sourced, curated by Andrea Inselmann at the Johnson Art Museum, Cornell University (2015), Relativity Suite at the Pitch Project, Milwaukee (2015), and PlastiKool II at Joseph Carroll and Sons, Boston (2010). Fitzgerald’s work has been reviewed in the New York Times, The Boston Globe, Art in America and Arts Magazine. She has taught at Cornell University, The Cooper Union, and Caldwell University.

MARY LUM was born in 1951 in St. Cloud, Minnesota. She received her BFA from the University of Michigan and her MFA from the Rochester Institute of Technology. Her work has been exhibited in numerous institutions internationally including Mass MoCA, North Adams, MA; The Drawing Center, New York; Kunstmuseum fur Geganwartskunst, Basel; deCordova Sculpture Park and Museum; and Beijing Academy of Fine Arts. Lum has been the recipient of numerous awards, including a Guggenheim Fellowship (2010), the Radcliffe Fellowship for Advanced Study (2004-2005), and a McDowell Colony Fellowship (2018), among others. She is a professor of painting and drawing at Bennington College in Vermont, where she has taught since 2005.

JOIRI MINAYA (1990) is a Dominican-American multi-disciplinary artist whose recent works focus on destabilizing historic and contemporary representations of an imagined tropical identity. Minaya attended the Escuela Nacional de Artes Visuales in Santo Domingo (2009), the Altos de Chavón School of Design (2011) and Parsons the New School for Design (2013). She participated in residencies at Skowhegan School of Painting and Sculpture, Guttenberg Arts, Smack Mellon, the Bronx Museum’s AIM Program and the NYFA Mentoring Program for Immigrant Artists. Minaya is a current Lower East Side Printshop Keyholder Artist and a Socrates Sculpture Park Emerging Artist Fellow, and has been awarded grants by the Joan Mitchell Foundation, the Rema Hort Mann Foundation and the Nancy Graves Foundation. Minaya’s work is in the collection of the Museo de Arte Moderno and the Centro León Jiménes in the Dominican Republic.

Based in Chicago, IL, REBECCA SHORE (b. 1956) has long explored pattern, ornamentation, trompe l’oeil and shallow space in her early quilts and later in meticulous paintings. In recent works she draws on a vocabulary of ribbons, draped fabric, chains and hoops which are defined in part by their physical characteristics: floating, looping and twisting ribbons, taut and weighted chains, pleated, translucent fabric, and stiff hoops. They “act” in front of bands of color and/or interlocking shapes derived from Medieval manuscripts and architecture. Often alluding to the human body or face, they are at once serious and playful.

Rebecca was raised in Vermont and has lived in Mexico, Tonga, Raiatea and Italy, and draws inspiration from a rich variety of intellectual and aesthetic sources. Rebecca attended Smith College in 1974-76 and then studied with the Imagists at the School of the Art Institute of Chicago (BFA 1981) and taught there herself from 1991-2017. She has presented solo exhibitions at Corbett vs. Dempsey, Chicago, IL; Eight Modern, Santa Fe, NM; Elmhurst Art Museum, Elmhurst, IL; Klein Art Works, Chicago, IL and The Chicago Cultural Center among others.