and so, and thus, and therefore

When an artist makes a drawing, she or he makes a series of conscious and unconscious choices based on a learned and intuitive understanding of aesthetics. These choices automatically generate a set of rules and exclude a range of second choices. (The same can be said about the word choices we make when we talk about rules and logic: “and so” excludes “and thus”, which excludes “and therefore.”)

The drawings in this show are all derived from one geometric drawing. The attempt to write out every possible variation of the rules of this drawing accomplishes two things: first it seeks to index all possible choices, as if in search of some algorithm for the perfect formula; second, it creates a new rule about the structure of the final composition, which depends of the process of systematizing these smaller compositions. This shift in context positions the second choices as equally critical to the final piece as the first choices.

The title of the show—and so, and thus, and therefore—is short list of phrases which can be used to describe how the characters and the systems develop from the rules. 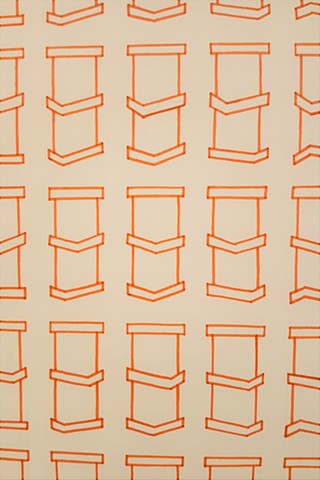