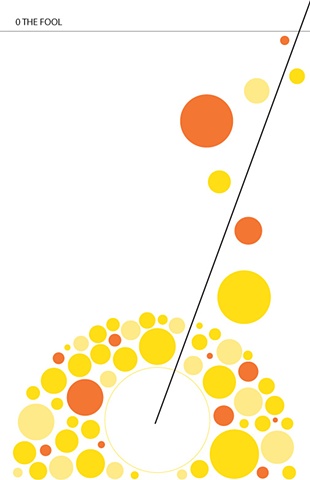 The Rider-Waite Tarot deck uses archetypal images that while beautifully & intricately designed, tend to leave the user stuck with preconceived notions of what they believe each card expresses. I have been studying & refering to these cards for inspiration & have designed a new version of the deck.

The imagery for the cards is based on the visual language of the early 20th century Avante Garde movement. The focus is on the structural and conceptual elements of each card in the Major Arcana. The designs are minimal & abstract, using basic geometry in order to represent the essence of each. The compositions are inspired by the Suprematist, Kazimir Malevich; Russian constructivists Alexander Rodchenko & El Lissitzky & artists of the Bauhaus, specifically Wassily Kandinsky.

Since these shapes are familiar to everyone, the imagery allows viewers to create their own interpretation of the cards instead of drawing overall positive or negative conclusions based on archetypal depictions. Through this process, I am leaving behind the traditional illustrated deck and focusing on the essential structure of each card.