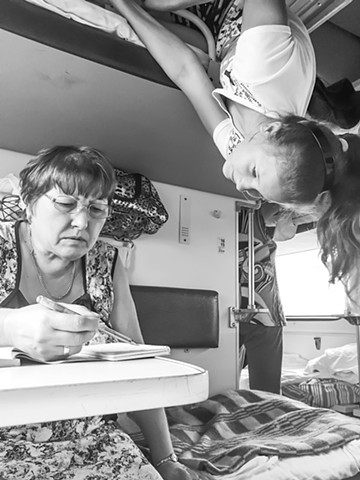 Synonymous with Nothing: From St Petersburg to Beijing on the Trans-Siberian Railway

In the spring of 2015, I received the Ildiko Butler Travel Grant for use traveling by train from St. Petersburg to Beijing. Following the Trans-Siberian Route, I crossed from Moscow to Ikurtsk (making stops in Suzdal, Yekaterinburg, Novosibirsk, and Listvyanka), where I picked up the Trans-Mongolian train, and continued on to Ulaan Baatar and, finally, arrived in Beijing. Over the course of six weeks, I photographed in the urban environments of the places where I stopped, as well as on the trains themselves, and collected old photographs at various flea markets along the way. Presented here is a small sampling of the photographs I made on the train and in the cities, as well as scanned, reprinted copies of the found images. Knitted together in a single thread, the different sets of images tell the interwoven stories of my observations in each place, the journey on the train, and create a fictitious history of the places themselves.