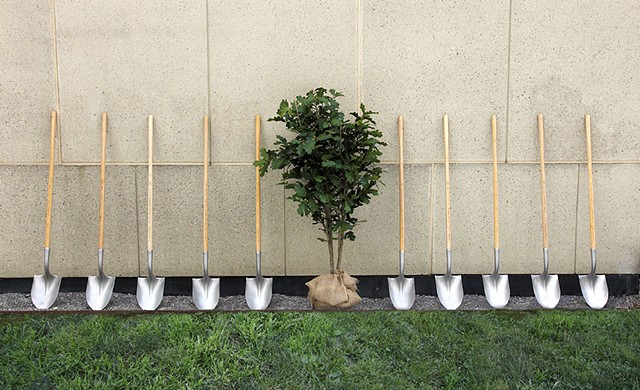 March 11 - April 4, 2014 Opening Reception: March 25, 6 - 8 pm with a performance of original choreography by students of The Ailey School

A panel/conversation about gun control and the Second Amendment, organized by the Fordham School of Law's Stein Scholar Program for Public Interest and held in conjunction with exhibition Palas por Pistolas/Shovels for Guns.

This exhibition is generously supported by Fordham University Art Collections and a grant from the Dean of the Arts and Sciences Faculty.

This exhibition participates in an ongoing project by Mexican artist Pedro Reyes, Palas por Pistolas, which converts firearms into shovels to plant trees, a modern take on the Biblical directive to convert swords into plowshares. Reyes is an artist with a strong belief in conversion and even cites among his sources of inspiration St. Ignatius Loyola, the founder of the Jesuits, who likewise influenced Joseph Beuys, an acclaimed precursor of Reyes in the realm of performance, sculpture and socially engaged art. Among the conversions Reyes is effecting are the roles of the audience, the art patron, the collector, the artist, and indeed art itself.

“The purpose of art is to come up with ways to transform the most negative instincts into creative instincts,” says Reyes, who wants his work to be “useful for social and psychological transformation.” With that in mind he has adopted the Latin term ad usum to describe what he regards as a desirable role for art: “There is art and there are applied arts, which are functional objects with a special degree of craftsmanship. But there should be a third category, ad usum, that is, an art to be used, [and where the] uses can be an entirely subjective enterprise. The piece or the artwork operates as a tool, a device or a tactic. A resource.”

Palas por Pistolas began in 2007 in Culiacán, Mexico, a city with a high rate of gun-related violence. Indeed, gun-violence and rapid deforestation—the result of clear-cutting to plant opium and marijuana—are twin byproducts of the drug trade with the United States that plagues Mexico as a whole. Reyes sees the smuggling of firearms into Mexico from an unregulated US gun market as “the biggest threat to democracy and economy and the well-being of everyone. The idea for this artwork was to connect guns to deforestation—to turn an agent of death into an agent of life.”

Working with local merchants, Reyes initiated a citywide gun buyback campaign, using public-service TV ads to encourage citizens to turn in guns without fear of trouble from the police. He collected 1,527 guns—40% of them in the high-power automatic category, most turned in by women. The military then disassembled the weapons and crushed the fragments with a steamroller, a “performance” captured on video. At a foundry the metal pieces were melted down and transformed into 1,527 shovelheads. Attached to wooden handles engraved with the story of their creation, the shovels became the centerpiece of an exhibition, whose run ended with the distribution of the tools to arts institutions and schools for the planting by adults and children of 1,527 trees throughout Culiacán. A special planting invitation was extended to those with loved ones who had lost their lives because of a gun.

Since then Palas por Pistolas has become a DIY kit, a kind of artwork franchise, easily adapted to various communities. Student-organized under the guidance of Fordham art history professors Jo Anna Isaak and Gregory Waldrop, S.J., Palas por Pistolas/Shovels for Guns accords with the Jesuit commitment to social justice, which includes “the protection of human rights and respect for the environment.” The hope is that it will further Reyes’ initiative to ameliorate the effects of gun violence and to engage the community in an art practice that is ad usum, useful to humans and their environments. Tree plantings will take place in April, to coincide with Earth Day.

For updated information on tree-plantings and related programming visit: HERE