Past Exhibitions > Highlights from the Senior Seminar 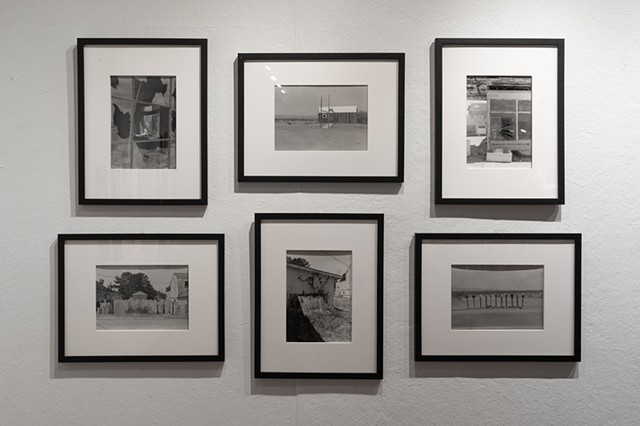 Highlights from the Senior Seminar
Sarah Hujber
< previous next >

In the summer of 2021, I set out on a cross-country journey to photograph the abandoned, decaying, and barren landscapes of America. The places where I found inspiration were the vast deserts of Arizona, and remnants of abandoned small towns scattered throughout California. I spent afternoons in ghost towns where nature was eagerly reclaiming the land lost to human-made structures.

One begins to wonder what caused someone to flee so suddenly, that they would leave memories behind? Is a house still a home with no one in it? The small fragments of life that remain remind us that these places once held meaning: a half-drunk coffee mug, Sunday morning papers, unused mailboxes lined up against a desolate landscape, or the fractured window on an old gas station, a place that was once somebody's American dream.

My work is inspired by photographers like Robert Adams, specifically his deadpan black and white images of the American West and Henry Wessel’s way of framing architecture within a vast landscape.

Ultimately I am trying to convey the feelings of isolation, stillness, and dreams lost that I sensed in these places. The abandoned places I depict in my photographs can be seen as the final resting place of human endeavour, and a space that will eventually be returned to the earth.

For the spring show I will expand on the same theme and include more 11x17 prints from my road trip. I am also interested in making 16x20 prints of select photos. In regards to the gallery space, I am interested in a shared show in the Butler gallery (am open to who I share the space with), or a solo show in the Lipani gallery if possible because I would ideally show my photos in a single row around the room. Preferably, the later in the semester I could show would be better because I still have so many 35mm photos to go through and more medium format to print. Since I need to be in the darkroom I won’t be able to work over winter break.