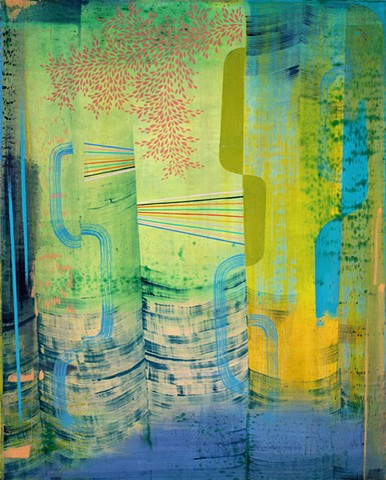 As an artist, I search for meaning in the unknown. Exploring a world beyond my own tangible reality, I see myself as part of a larger, richer universe. A universe that expands further through a conscious effort to embrace the meaning of that which I create in my own personal life, as well as the experiences generated by the lives of those around me.

Art is like magic, an illusion created by the force of humanity. Our choices in life can be amazing portals for adventure. For me, these possibilities present themselves through the process of painting: researching potent images, configuring them on canvas, and struggling to imbue them with a sense of myself and my own wonder at the enormous complexity of the world. I seek a better understanding of truth in nature with constant comparison and evaluation of opposites. Using a visual vocabulary derived from a world that often goes unnoticed and sometimes hidden, everyday events such as conversations between birds, forces that drive water, or the cellular structure of plant life, I begin to reinvent reality. This experience enables me to come closer to an understanding of how it is that I identify with the world. The concerns that arise from this process reveal themselves to me as subversive dualities existing in both the natural world and the man-made. When we consider something in a new context, having unearthed the intrigue that lies just beneath the surface of the seemingly simple, the original meaning is altered and brought to a new level of consciousness, creating metaphor. In this way, I can see, and show, that the natural world is not unlike our own man-made realm, an alternate universe filled with an active power to recognize desire, temptation, and frailty.

The paintings create a secret recipe for an inner landscape of the human condition; narrative vignettes that are both alluring and mysterious. Nature, and those elements existing in its microcosm become metaphors for a strange and at times super-reality, a parallel universe that questions the natural scheme of life itself.

November 2021 Bio: Gabe Brown holds her BFA degree from The Cooper Union in New York City and an MFA degree in Painting from the University of California, Davis.

Brown is a 2018 recipient of a NYFA Fellowship in Painting, a Sustainable Arts Foundation Award, and one of two artists chosen to be included in a public arts project for ArtsBridge. She has been a resident fellow at The Saltonstall Foundation, Anderson Center at Tower View, and Women’s Studio Workshop. Her paintings and works on paper have been exhibited nationally in galleries and museums such as Kenise Barnes Fine Art, Samuel Dorsky Museum of Art, Butters Gallery, Matteawan Gallery, Adah Rose Gallery, The Saratoga Arts Center, Garrison Arts Center, John Davis Gallery, ArtsWestchester, Schweinfurth Arts Center, SUNY Brockport, The Horticultural Society of New York, Albany International Airport, Sears-Peyton Gallery, and Carrie Haddad Gallery. Her work is included in both public and private collections.

Gabe Brown lives and works on a farm in the Hudson Valley. She is an Adjunct Professor in Painting and Drawing at Fordham University.