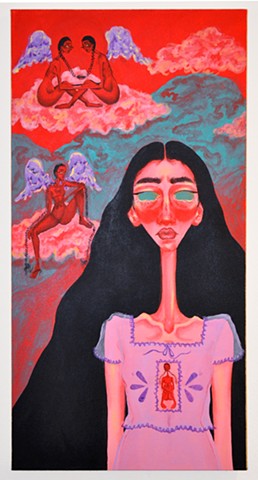 Through my paintings and drawings, I carve out a world for diosa, the protagonist in my work; she is a partial self-portrait and a partial reflection of the events I have experienced or stories I have heard throughout my life. Moreover, diosa embodies the struggles of navigating the world as a Mexican-American woman. Diosa is joined by other beings that serve as an amalgamation of the aspects of my culture that have instilled fear in me due to my childhood desire to assimilate into American culture.

My paintings are prefaced by small drawings, which are emotional and fluid. These allow me to contemplate the stories and ideas that are later captured in my acrylic paintings, which are more visually defined. I am interested in the ways that femininity and sexuality can exist as both debilitating and empowering aspects of identity. Diosa embodies the self-hatred I have felt in predominantly white spaces, where I have been both criticized and fetishized. Her body is elongated and skeletal, with bones protruding through thin skin. These elements speak to the body dysmorphia and negative self-image that I and many other Latinx individuals experience but rarely verbalize. Through these pieces, I aim to take up space, to show that diosa and those who identify with her story can and should be the subject of fine art.