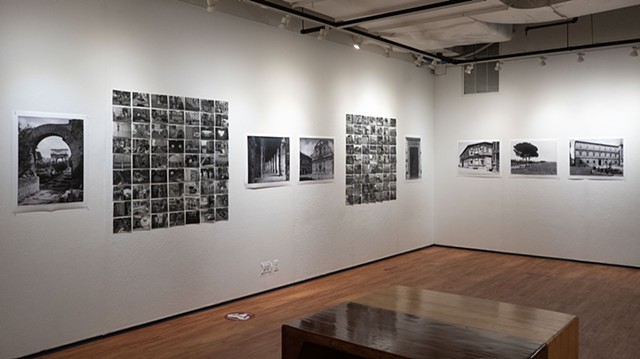 Some five hundred black and white images made by Fordham students over the past ten years form large grids of postcards on the gallery walls. These groupings alternate with poster-size enlargements of late 1800s photos selected from the Alinari collection, the oldest photographic agency in the world. The energy and variety of imagery represented in the small postcards contrast with the large, iconic Alinari images; nevertheless, despite their differences of scale and century of production, a dialog exists between the two regarding the age-old photographic questions of where to stand, how to frame, and ultimately, what to memorialize.

The images from the Documentary Photography: Italy Program were made over one month in Rome during an intensive summer class that introduced students to photography and generated work relating to Italy's people, architecture, and culture.

The cosmopolitan city of Rome, rich with artistic history, served as the source for explorations and the catalyst for discussions. From the streets and piazzas to the ancient architecture of the Colosseo, the class utilized the wealth of visual stimuli as a resource and a backdrop against which to critically discuss the strategies that photographers use in communicating their interests.

While 1839 marked the first publicly announced and commercially viable photographic process, it would not be until 1900 that students could capture the world around them with cameras. Before that, the only means to record one's Rome experience was by purchasing photographic prints and folios from groups such as Alinari, whose artisans took it upon themselves to provide accurate documents of the eternal city that might serve as souvenirs, gifts, or objects of scholarship.

These vintage Alinari prints were discovered in a defunct art history teaching collection and were most likely collected by professors in the early 20th century at the University of Minnesota. The photographs were originally 9" x 7" paper prints; however, they have been scanned and enlarged for this exhibition, revealing previously obscure details.

These two bodies of work represent a range of years, different photographic sensibilities, and interests. Still, each photographer is engaged in the process of carefully studying Rome and representing it in a straightforward, descriptive manner. Fidelity to what is framed being of paramount importance.