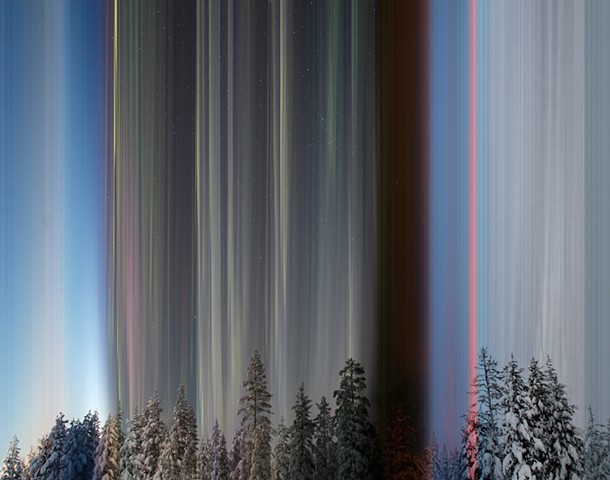 The photographic work of Brian and Gareth McClave represents several years of development of a new photographic process that captures reality in a slow scanning motion across a scene. To do this the brothers developed new software that can take a visual slice through thousands of sequential images of a scene to generate an image that reveals the passing of time as the viewer’s eyes pan across the final photograph from left to right. This is a new twist on the traditional photographic long exposure, whereby the moments of time do not all merge together on top of each other but rather line up in sequence. This offers up the narrative of the scene in the same way as a line of words in a sentence whereby we can gain meaning and insight as we read from left to right across the page.

From a technological perspective the combination of time-lapse photography and digital sampling present a kind of visual encryption of a scene. The image invites the viewer to decode what is presented as a strange, alienating and futuristic environment back into something familiar. The given titles offer clues but no answers. On an aesthetic level the images invoke modernist paintings where individual points of colour, converging perspectives, or drips of paint are collected on the canvas to create an overall effect that distances the viewer from the subject by revealing it in a different light. It is the way that this different light is collected and then redistributed across the print that points to the photographic heritage from which the technique is drawn.

Those images created with a static camera collect the movement of the subject through the frame as each line is triggered, like a Muybridge frame, to capture and reveal an aspect of a scene that might otherwise be missed. This is especially insightful where natural elements such as the movement of the tides are seen to ebb and flow through the course of the day-long exposure and therefore across the duration of the print. On the other hand, when the camera is moving and capturing the landscape through which it passes, the image simultaneously portrays time and distance. This can leave the viewer in a quandary as the constantly changing viewpoint and the constantly changing viewed are combined into a single, sometimes chaotic image. But the chaos suggests or creates something new: a chronographic representation of time that captures the pace and instability of an increasingly mobile age.

In offering a view of a day, or a week, or a year, in a single, but complex, glance, these images allow us to take a step back from the daily densities of our lives and provide an opportunity to lose ourselves in these strange but familiar, calm and cryptic, abstract journeys.