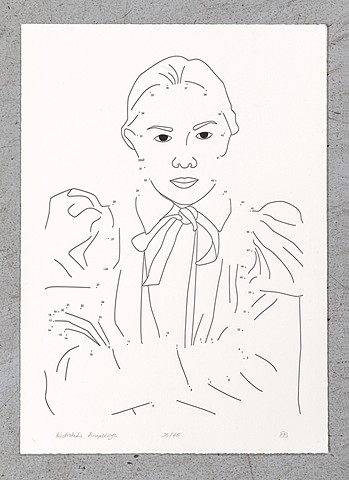 Željka Blakšic AKA Gita Blak
next >

Nadezhda Krupskaya (1869 - 1939) was a Russian Bolshevik revolutionary, activist and politician who believed that access to an education was a step towards improving people’s lives. She was a historian and a theoretician of educational science in addition to being one of the main organizers of the socialist system of education. She served as the Soviet Union’s Deputy Minister of Education from 1929 until her death in 1939. A committed Marxist, she encouraged the development of a library system in the Soviet Union. She was the wife of Vladimir Lenin from 1898 until his death in 1924.

Connect the Dots by Željka Blakšic started years ago as a drawing game made for a Game Night series of free public events presenting artist-made games, organized by Sheetal Prajapati and Anna Harsanyi at Soho20 Gallery in New York City. Participants were invited to connect the dots in order to reveal and discover a female revolutionary portrait. All the women represented in the series of prints played a pivotal role in their community and later society; as activists, theorists, educators and politicians in launching the revolution or bringing in a monumental social change that enriched the lives of many. Here we remember them and celebrate their bravery, selflessness, dedication and complexity.

Željka Blakšic AKA Gita Blak is an interdisciplinary artist and educator who works with performance, 16mm film, video, and installation. Her practice is often collaborative and inspired by the sub-culture of the 1990s-era in Croatia, when punk, anarcho and eco movements were having a renewal. Resistance manifested itself through the cooperation and gathering of different alternative social groups and this experimental environment became a university of rebellion–a key force, giving voice to new expressions of democracy, justice, common values and free speech. Blaksic often collaborates with members of different subcultures, activists, schoolgirls, singers, urbanists, and students, creating sites and praxis of collectivity. Using pedagogical methodologies within the context of contemporary art she organizes workshops, creates publications, makes films and exhibitions.