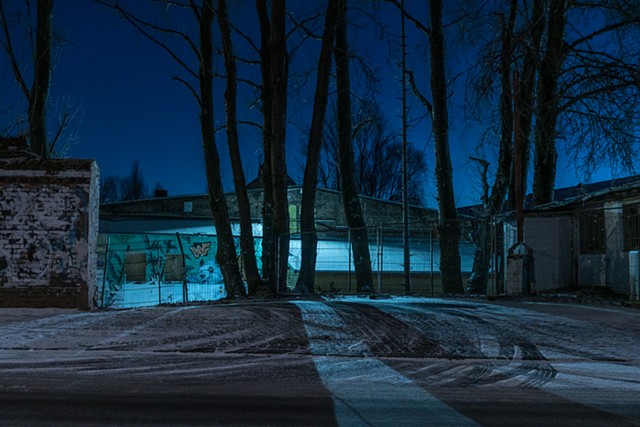 In der Fremde | Pictures from Home
next >

Internationally exhibited artist, Romeo Alaeff, presents a haunting, cinematic photobook on Berlin & the search for “home.” The book features haunting, never-before-seen images of Berlin at night—a city infamous for its nightlife—now presented in a desolate, eerie, and deeply personal light.

The book will be published by the esteemed Hatje Cantz, “one of the leading publishing houses for art, photography, design, and architecture books with a focus on contemporary art” — a 75 year old publisher with over 800 titles. The book has already received half of its publication funding via a generous grant from Stiftung Kunstfonds.

Immediately labelled by Kickstarter as a “Project We Love”, the campaign reached over 80% of its goal in the first 24 hours and surpassed it within 48 hours (almost to the minute), record time for a photobook. Books and prints will still be available for the duration of the 30 day campaign, while they last. Nocturnal street-photo workshops and night-portrait sessions, as well as postcards sets are also available as rewards. The kickstarter campaign runs from June 9th, 7pm - July 9th, 2020 (Berlin time).

The link to the campaign, which includes a cinematic photobook trailer, is: here. More info about the project can be found on Degrasse Projects and a Press Kit can be downloaded from Google drive here.

Romeo Alaeff was born in Brooklyn, New York in 1970. He received his BA in Photography from Tulane University in 1993 and his MFA in Photography from the Rhode Island School of Design in 1996. He has exhibited internationally in exhibitions and film festivals and has produced work in a range of media, including photography, film/video, drawing, and writing. In addition, Alaeff has been a guest artist at the Rhode Island School of Design, Brown University, Pratt, Parsons, The University of Georgia and Georgia state University. Alaeff is the author of “I’ll be Dead by the Time You Read This: The Existential Life of Animals” (Penguin/Plume, 2011), a humor/philosophy book of drawings. His stickers also appear in “Stickers: Stuck up Piece of Crap: From Punk Rock to Contemporary Art” (Rizzoli, 2010) Alaeff is also the founder and Editor-in-chief of Lines & Marks, an online publication dedicated to the role and practice of drawing across the arts and sciences. He currently lives in Berlin.