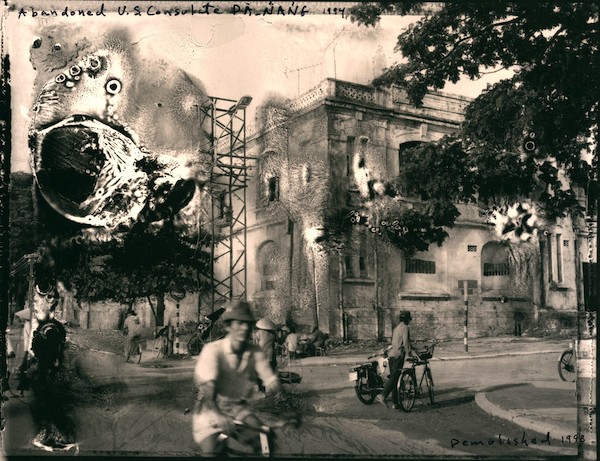 Fordham University is proud to present a new two-person exhibition of photographs in our Ildiko Butler Gallery by Bill Burke and Lois Conner. Landscape Photographs brings together two photographers that have photographed extensively in both the United States, as well as abroad. Both bodies of work have been made over many years, Burke in Southeast Asia and Conner in China with each utilizing large format cameras to record their subject in extraordinary detail.

Bill Burke: Statement I began to travel to Asia in 1982. In the years after failing my draft physical in 1968, I began to think I had missed a significant experience that defined my generation. I became curious about the people I would have been ordered to kill or be killed by. Studying the Vietnam War, I became familiar with the names of places and events that took place there. Over the next eighteen years, I visited many parts of the former French colonies of Viet Nam, Cambodia, and Laos. Most of my photographic efforts were toward making portraits, but as the region recovered from “The American War,” I began to see how original architecture was being destroyed and repurposed. I also saw how the architecture could be seen to represent the flow of colonial power that had molded the region during the previous century. I took it on myself to make some small record of buildings that might soon be destroyed or that embodied an aspect of the foreign power that had commissioned them.

Bill Burke: Biography Bill Burke (b. 1943) was born in Milford, Connecticut and received a B.A. in Art History from Middlebury College and a B.F.A. and M.F.A. in Photography from Rhode Island School of Design. For over twenty years, Burke concentrated on making photographs in Indochina. His travels took him on journeys through the political, cultural, and social traditions and upheavals of these foreign lands. Burke’s images are notobjective political documentary, but rather humane portraits. Burke has received grants from the John Simon Guggenheim Foundation, the Ford Foundation and the Massachusetts Council on the Arts, as well as two artist’s fellowships from the National Endowment of the Arts. His publications include I Want To Take Pictures, 1987; Bill-Burke-Portraits, 1987; They Shall Cast out the Demons, 1983; Mine Fields, 1995; and Autrefois Maison Privee, 2004. Burke’s work is in the collections of the J. Paul Getty Museum; The Museum of Modern Art, New York and San Francisco; the Smithsonian Institute Museum of American Art; and the International Museum of Photography at George Eastman House. Currently, Bill Burke teaches photography at the School of Museum of Fine Arts, Boston.

Lois Conner: Statement My subject is landscape as culture. I am not interested in an untouched, untrammeled world. What I am trying to reveal through photography in a deliberate yet subtle way is a sense of history. I want my photographs to describe my relationship to both the tangible and the imagined, to fact and fiction.

Lois Conner: Biography Lois Conner is known for her large-scale panoramic photographs relating to a global landscape. Her pictures are characterized by their narrative sweep, sense of place, and their implicit attention to history and culture. Lois Conner has been awarded numerous awards, including an Anonymous Was a Woman fellowship, as well as grants from the Guggenheim Foundation, the National Endowment for the Arts, the Rosenkranz Foundation and the New York State Council on the Arts. She has been teaching photography for thirty years, including a decade at the Yale School of Art. Recent books include: A Long View, Shanghai Center of Photography; Lotus Leaves, Wairarapa Academy, New Zealand; and Lost: Beijing, KG Projects, NY. Beijing Contemporary and Imperial, Princeton Architectural Press, NY. Her books include Beijing (2018); Lotus Leaves (with translations of PK Leung by John Minford), 2018; Beijing: Contemporary and Imperial (2014), Beijing Building (2012), Life in a Box (2010), Twirling the Lotus (2007), and China: The Photographs of Lois Conner (2000). The Arthur M. Sackler Gallery, Smithsonian Institution, in Washington, DC, presented a retrospective of her work, Landscape as Culture, in 1993. Her work is in the permanent collections of many museums, including the Museum of Modern Art, the Metropolitan Museum of Art and the Brooklyn Museum in New York; the San Francisco Museum of Modern Art, the Getty Museum and the Los Angeles County Museum of Art in California; the Victoria and Albert Museum, the British Museum and the British Library in London. Conner has been teaching photography for thirty years, including a decade at the Yale University School of Art. Other venues include Bard College, Princeton University, Sarah Lawrence College, Central Academy of Fine Arts, Hangzhou, China, Cooper Union, Stanford University, Louisiana State University at Baton Rouge, the New School and the School of Visual Arts.