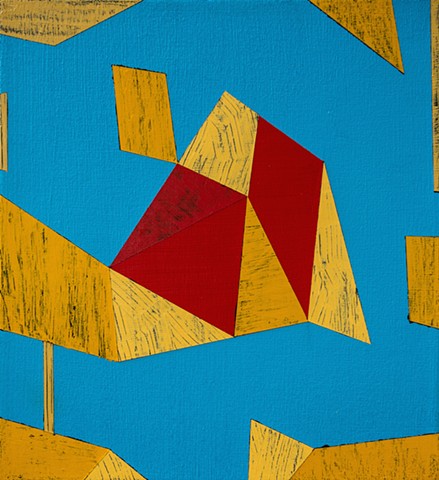 When I first began assembling this body of work, I was interested in the make-up of RGB monitors, heavily pixelated images, and the like. I wanted to understand how computers assembled images - how they ordered them, structured them, and assembled them into one whole. However, over the course of a few short months I realized that it wasn't the so-called digital aesthetic that I was interested in, but the very act of putting together an image, piece by piece. I began using tape to isolate parts of my canvas, concentrating on small regions of the painting, building up on them in order to generate forms that were geometric, but also clumsy. After spending some time creating dense, organized ‘block’ paintings, I quickly depart from the theme of technology, taking with me a new process of painting.

Many of the paintings you see in Piece by Piece take on non-objective values, while some of them are reminiscent of recognizable forms. My painting, “Flock of Birds in Storvreta” looks back to a scenic memory of my childhood in the small, rural town of Storvreta, Sweden. On the other hand, my smaller untitled works speak of no particular place, or memory, or anything.