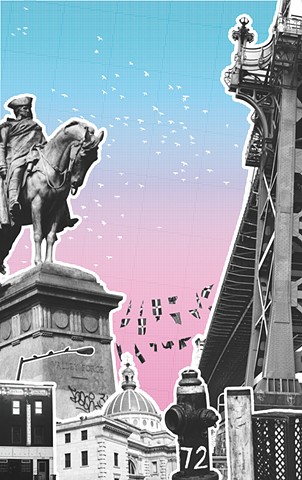 The six works in this show are part of the larger project Living Los Sures, a collaborative documentary about the Southside of Williamsburg, Brooklyn, produced by UnionDocs Center for Documentary Art.

From 2010 through 2014, UnionDocs is producing a collaborative web documentary about the Southside neighborhood in Williamsburg, Brooklyn where the organization has been situated for nearly a decade. Part omnibus film, part media archeology, part deep-map and city symphony, the project uses Los Sures, a brilliant work of cinema verite directed by Diego Echeverría in 1984, as a starting point for the investigations of more than forty artists over the course of four years. Collectively, their projects tell the story of a longstanding Latino community that is defeating displacement and surviving the growth machine. Living Los Sures is a multi-part project that restores a lost film, remixes local histories, reinvestigates Williamsburg’s Southside today, and hopes to reunite a neighborhood around a sustainable future.

In the late seventies and early eighties, the Southside of Williamsburg was one of the poorest neighborhoods in New York City. In fact, it had been called the worst ghetto in America. Los Sures, a documentary from 1984 by Diego Echeverría, skillfully represents the challenges of this time; drugs, gang violence, crime, abandoned real estate, racial tension, single parent homes, and inadequate local resources. Yet, Echeverría’s portrait also celebrates the vitality of this largely Puerto Rican community, showing the strength of their culture, their creativity and their determination to overcome a desperate situation.

UnionDocs has partnered with Echeverría to develop Living Los Sures, revisiting his powerful film to pursue four primary goals. RESTORE: Bring the original film back to life and make it accessible online for the first time, working with the local community to update, annotate, and challenge the narrative through a participatory platform. REMIX: Expand the experience of the original through deeply interactive audio/visual experiments. REUNITE: Activate the community to engage vital civic issues for a more sustainable future. REINVESTIGATE: Create new short documentaries to illustrate the issues the community faces today.

To date, over thirty such reinvestigations have been created by members of the UnionDocs Collaborative Studio. Each year since 2010, UnionDocs has hosted twelve Collaborative artist-fellows who work together to produce short documentary projects about the Southside today. These projects cover a wide range of topics and forms -- from short videos to soundworks, audio walks, installations and interactive media. The works in this show represent the variety of form and subject matter, as well as the common concerns, that characterize the Living Los Sures project.