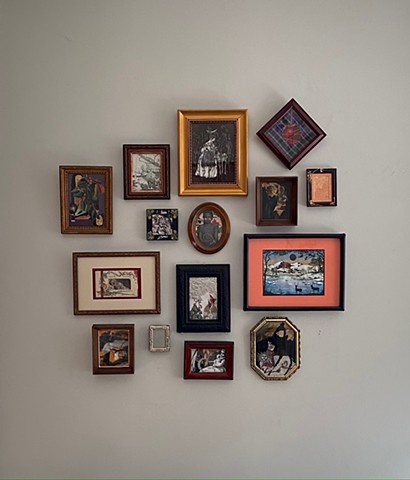 Julia Taylor Footsteps on the Boundary to Another World

Here we are in Crawford Notch, on the road through the White Mountains of New Hampshire. The year is 1850. It’s a hotspot for ill-advised Victorian rusticators, a landscape of mountains, woods, and lonely inns not unlike the one where Spiritualism was born, just a couple of years ago. That inn was supposed to be a haunted one, even later on, when it was just a house.

When two little sisters named Maggie and Kate, who lived inside, tied an apple to a string. They bounced it on the floor when their mother wasn’t looking, and the rest is history.

This moment caught us between homemade and manufactured goods, between animal and mechanical power, between folklore or conventional religion and scholarship to legitimize our truths. Americans are steeped in mysticism, curiosity, and dread, and the perfect cure for modernity like that is a little mountain air, an untouched landscape. The real things in this world, the awesome, where you’re closest to the divine.

This particular wilderness is just a day’s train away from Boston, but the first generation to hike for fun will be the first to freeze to death, in July, on the heights of Mt. Washington, on their way up to the new hotel on top.

Inspired by American folk art and the Spiritualist movement, this work takes a look at 19th-century New England: its people, their dead, and their love-fear relationship with the natural world. It attempts to color the nostalgia of folk art with sort of apocalyptic thinking; it really must have seemed like the end of the world.