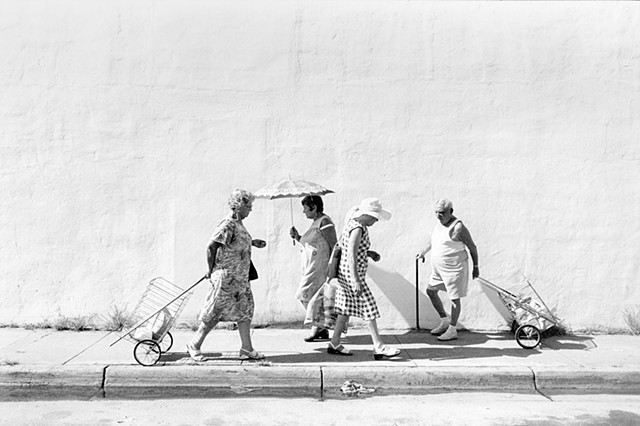 Fordham University's Ildiko Butler Gallery is pleased to present the photographs of Gary Monroe. Exhibited here are twenty-one gelatin silver prints made between 1977 and 1986 in South Beach, Florida, of the elderly Jewish community.

In Gary's words: South Beach was remarkable when I photographed there, which was almost daily. Actually, it was for a longer period, but that decade constitutes my being committed to making visual sense of life there. It was where Jewish people came to be together in their later years. In its way, it was a sacred place. These were the Jewish of the 'Greatest Generation,' Holocaust survivors among them; refugees from the cold northeast; working-class retirees. The average age was well into retirement. Ten years later, the Art Deco movement and other forces, including Miami Vice, and economic development, caused the demise of the old-world traditions long before attrition would have taken its toll. The lifestyle vanished as if it had never happened.

Gary Monroe, a native of Miami Beach, received a master's degree in fine arts from the University of Colorado at Boulder in 1977. Since 1984 he has photographed throughout Haiti, Brazil, Israel, Cuba, India, Trinidad, Poland, France, Russia, Egypt, and in his home state of Florida. He has received grants from the National Endowment for the Arts, Florida Department of State's Division of Cultural Affairs, Florida Humanities Council, and the Fulbright Foundation. Gary's publications include The Last Resort, Florida Dreams, Life in South Beach, Miami Beach, and Haiti. He is also the author of numerous books, including The Highwaymen: Florida's African-American Landscape Painters, Harold Newton: The Original Highwayman, and Silver Springs: The Underwater Photographs of Bruce Mozert. Recently he has been photographing the impact of corporate-driven planning on the Florida landscape.