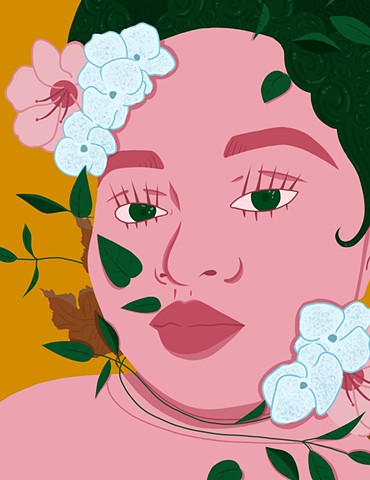 Kaila Cordova Into the Garden

My work is based on florography: the “language of flowers” developed during the Victorian Era in England. Folorography initially became popular around 1846-1901, following the publishing of Kate Greenaway’s illustrated book Language of Flowers. The book provided common botany with symbolic representations, both negative and positive. Based on her book, while some flowers and foliage represent positive qualities such as beauty and fortitude, others represent negative emotions such as jealousy and grief. The floral imagery in each of my portraits does the same. Each illustration is named after famous Victorian activists, intellectuals, or creatives and botanical classifications, structures, and arrangements.

Drawing inspiration from artists such as Robert Kushner and Amanda Phingbodhipakkiya, I created 22-by-17-inch digital portraits which address the positive and negative emotions that people have experienced during quarantine due to COVID-19. The early months of quarantine were hard for everyone in various ways regardless of gender, socioeconomic status, age, race, and nationality. While these aspects are valuable parts of the human identity, they frequently lead to barriers against commonality and connection. However, underneath it all, we are all still human and have a lot more in common than we think.

While I am closely familiar with some of my subjects, there were a few that I grew to know through my process. I began to admire their openness and the courage that their vulnerability required. However, my desire to prevent intimate familiarity with the viewer is why the names of my subjects will never be revealed. Instead, through the similarities in iconography between each portrait, the viewer will determine if they can connect with the subject simply by their feelings. Like the subjects of each portrait, they too are not alone in how they feel, which is a common belief experienced by many due to many months in relative isolation.