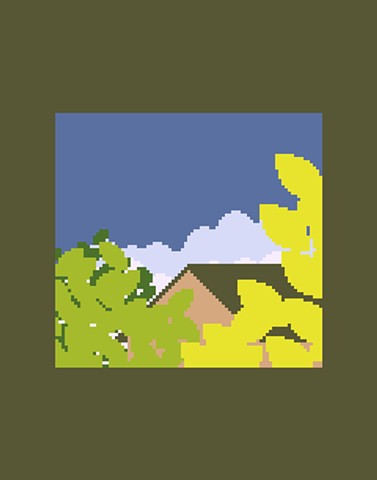 Around 2009, I found myself back at home in rural Pennsylvania unexpectedly. I had been studying photography at Fordham, and had grown accustomed to bringing my camera everywhere. At home, I found myself shooting less, despite carrying a camera, and sometimes didn't bring my camera at all. Allowing myself to be more present was freeing in a way, but not without tension. I kept finding myself wishing I had taken my camera with me, or would catch myself composing a shot, with nothing to record it.

When I returned home, it was to a development its builders had intended to ensure residents' privacy, despite a very close proximity to each other. The result was instead isolation, and overall detachment from the surrounding community. Neighbors remained strangers, and I instead became familiar with the mid-90s, suburban architecture of their houses, as seen from my third-story bedroom window.

As I began exploring pixel art, I found the same ideas I was drawn to as a photographer cropping up in my work. Moments I thought I had missed were "developing" in 8 and 16 bits. These are "photographs" I wish I had taken.

Bio Gabriel Blankenship is a multi-disciplinary artist, specializing in photography, installations, and digital works. He studied photography at Fordham University from 2006 to 2009 and started making pixel art as The Pixelsmyth around 2010 on a shared family computer running Windows XP. Drawing inspiration from early personal computer user interface design, and desktop publishing software, he is interested in exploring ways to bring pixel art off the screen, and into physical space. He works both individually and together with Lancaster, Pennsylvania-based collaborative fourhead.

What is pixel art?

While the aesthetics of pixel art are firmly rooted in the low resolution graphics of video games and computer software of the late 20th century, the mechanics are ancient. Using similar principles to mosaic tilework, textile weaving, and embroidery, each pixel is individually placed, economically expressing form, color, and value. Limited memory and processing speeds restricted early video game and computer graphics designers in resolution and palette, leading to works like the simple, tile-based designs of Nintendo's Super Mario Bros for the NES, and Susan Kare's approach to the graphical user interface of Apple's Macintosh. As computing power increased, image resolutions increased, eventually eliminating the technical need for such an efficient design language. Pixel art has maintained popularity through vibrant internet communities, producing work ranging from simple 8-bit compositions, to full photorealistic renderings.