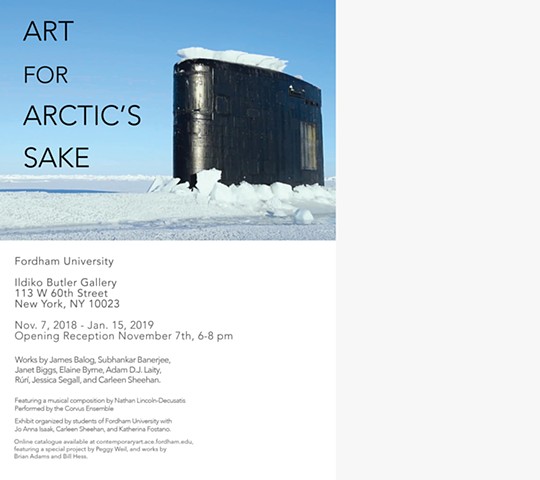 At this moment — when the need to bring public awareness to the crisis of global climate change has never been greater — the students of Fordham University are pleased to present Art for Arctic’s Sake, an exhibition that calls attention to the profound impact climate change is having upon the sensitive ecosystem of the Arctic and the communities that rely upon the region’s natural resources. For many of us, the Arctic remains abstract and distant, but the work of the artists in this exhibition brings the Arctic and the disconcerting changes taking place there to our immediate attention, revealing the epic scale of global interconnectedness.

At the same time, Art for Arctic’s Sake is a testament to the power of art to effect change. The doctrine of ‘art for art’s sake,’ in which art focused on its own formal practices, has led, over time, to its disenfranchisement, separating it from its social environment. In a deliberate reversal of this movement, a growing number of artists have adopted socially engaged artistic practices and many have taken on the role of stewardship of the environment. In some instances, their work has directly contributed to environmental reform and social change. Art can change attitudes towards the environment by imaging more sustainable and ethical habits of human action and thought.

The Arctic National Wildlife Refuge is currently the most debated tract of public land in the United States and Subhankar Banerjee’s photographs have forcefully entered that debate. When the U.S. Congress was debating whether to open the Refuge to drilling or preserve it as wilderness, Senator Barbara Boxer presented his photographs to the Senate. By a narrow vote, the Refuge has been saved for the time being, owing in part to Banerjee’s photographs. Adam D. J. Laity’s Moving Image Study of Smeerenburg Glacier Calving captures the moment of the glacier losing massive chunks of ice, revealing the alarming rate of melting that is taking place. James Balog records the evolving landscape and melting ice over a 10-year period in his time-lapse video. His award-winning film Chasing Ice (2012) has graphically brought this massive disintegration to the attention of thousands of viewers. Carleen Sheehan examines the same process but on a much smaller scale. She photographs recently calved glacial ice in the moments before it vanishes. Peggy Weil’s digital photo- of 88 Cores slowly pans down a historical record of ice cores, demonstrating evidence of climate change through the atmospheric conditions of the trapped air. Jessica Segall’s video Breaking Ice, made in collaboration with physicists and musicians, brings the problem home to us by showing a laboratory-controlled, model ice house breaking and shattering into pieces. Rúrí has created a glimpse into a future reality by scientifically projecting future topologies of shorelines of countries after the East Antarctic ice sheet melts. Both Janet Biggs and Elaine Byrne address the exploration of the Arctic. Janet Biggs films herself firing an emergency flare into the Arctic sky while narrating stories of failed attempts to reach the North Pole. Elaine Byrne documents the search for the Northwest Passage and the rush on the part of numerous countries to establish rights to the area. Bill Hess and Brian Adams examine the impact of the changing environment on Native Alaskan communities. Hess explores the connection between the Inupiaq people and their subsistence harvest practices, while Adams, in his series I am Inuit, shows the challenges faced by the local communities, portraying the struggles of Native Alaskans.

Art for Arctic’s Sake is at once an homage to the natural world and an emergency call. We are reminded, at this crucial moment, of exactly what is at stake -- for our time and deep time.

There will be an opening reception on November 7, 2018, from 6-8 pm featuring a musical composition by Nathan Lincoln-Decusatis performed by the Corvus Ensemble.

Show Information: The show runs from November 7, 2018 - January 15, 2019 at the Ildiko Butler Gallery in Fordham University Lincoln Center campus. The online catalogue can be found here. Our opening reception will be on Wednesday, Nov. 7, 6-8pm.