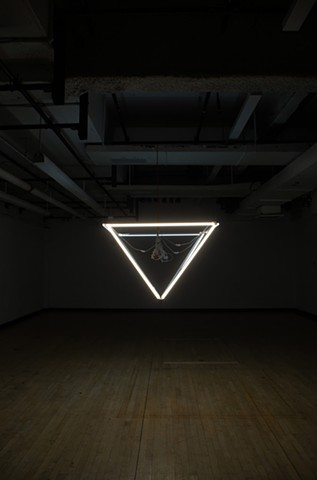 Based on the play Electra, by Sophocles, with influence from Aeschylus’s Oresteia, my piece was originally designed to be an immersive installation that subverted the traditional interpretation of the central conflict in the narrative.

To adapt the exhibit to a virtual space, I distilled my concept to explore familial hierarchies and the characters’ individual relationships with patriarchal control and authority through geometric LED structures.

By representing the characters as the LED tubing, the different configurations of the power cords attached to the structures convey the control that the influencing force has over the life of each individual. It is my intention that the ominous white glow that emits from each piece quietly highlights the presence of the power cords attached to the lighting fixtures, emphasizing the haunting nature of Agamemnon’s patriarchal influence over the other members of his family, even after his death. The ordering of the pieces from top to bottom indicates the hierarchy of agency among the four characters, starting with the individual who holds the most authority and agency, and ending with the individual who possesses the least amount of agency.