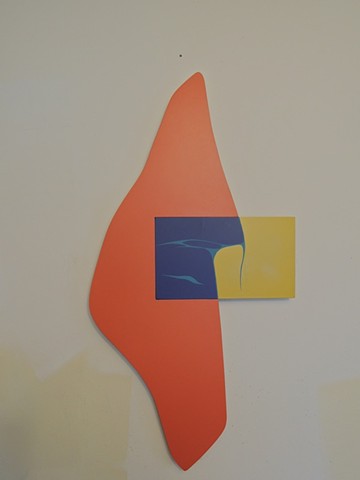 These works consist of shaped masonite that has been spray-painted and then painted on with oil. Each piece has two components—one geometric and one biomorphic—that fit into each other. This creates a simultaneously binary and singular effect: although there is a physical and visual separation between the rectangle and the surrounding biomorphic form, there is also a unification created by the continuation of the shape of the biomorphic form into the rectangular form, as well as by the painted line that extends into the pieces. Other aspects of the works contain this same “push/pull” duality as well. While the lines of the pieces are very organic, the surface maintains a very synthetic feel, devoid of nature’s influence or any indication of the artist’s hand. The interlocking of physical components and their distance from the wall lends the pieces a sculptural quality, while the physical flatness of the pieces—which is enhanced by the lack of modulation—works to opposite effect, moving them away from the realm of sculpture. My decision-making with these pieces has been guided by a desire to create this paradox of simultaneous tension and cohesion.

I have drawn influence from a range of artists, both historical and contemporary. With their emphasis on composition and simplicity of form and color, the Suprematists, such as Kazimir Malevich and Lyubov Popova, were an important starting point for me. With regard to composition, Franz Kline’s black-and-white works, which break up space solely with line, were a strong influence, as was Clyfford Still’s work when it came to figuring out the overall movement in my pieces. In forming the identity of my line and my choice of “subject matter,” I looked at both Sue Williams and Inka Essenhigh, whose work has distinct organic/human qualities but also enough ambiguity to elude being labeled as figural. Although I went in a somewhat different direction in terms of abstract vocabulary, Matthew Ritchie’s smooth, glossy surfaces were an inspiration for the kind of surface I employ in my paintings. Other precedents for my work (though not necessarily inspirations) include Jean Arp’s wooden reliefs, Joan Miró’s organic shapes and lines, and Joanna Pousette-Dart’s “gesturally” shaped canvases.

I’d like to thank several people for their support in helping me realize this show: my advisor Casey Ruble who has helped me with every step of the process; my neighbor John Lynn who helped with some of the more difficult cuts; and lastly, my mother Mary Jean who has always encouraged my art, but has done so more than ever with this show.